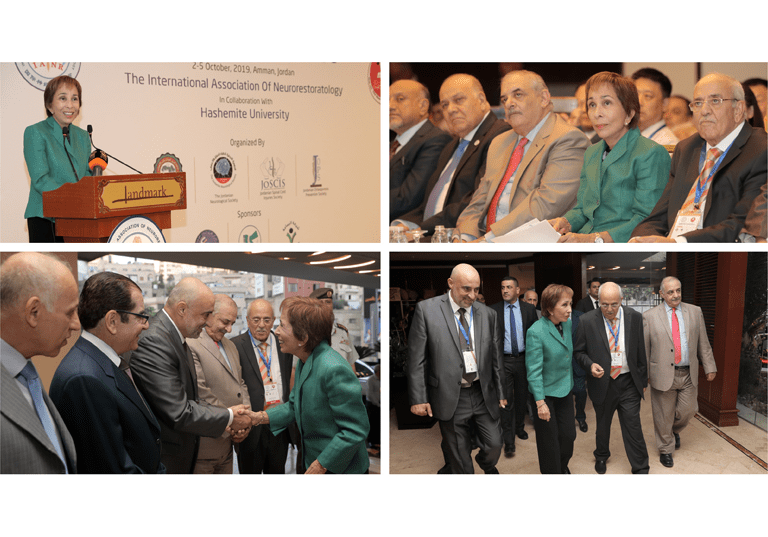 Stem cells Arabia actively participated in the 12th Conference of the International Asosciation of Neurorestoratology. That was held under the patronage of Her Royal Highness Princess Basma Bint Talal during the period 2-5 / 10/2019, in Amman, Jordan. The conference was held in cooperation with the Hashemite University, the Jordanian Society of Neurologists, the Arab Association of Neurological Societies, the Jordanian Society for the Prevention of Osteoporosis, and the Jordanian Spinal Cord Care Society.The conference, which was supported and organized by Stem Cells Arabia, Jordan Orthopedic and Spine Center, and Al-Yamama Company, was attended by more than 65 speakers from the United States, Europe, Asia, Arab countries and Jordan, most of them academicians, scientists, researchers, specialists in neurological and structural restoration science and heads of scientific research centers.Activities of the first scientific day of the conference were held at the Hashemite University, where it included scientific sessions and bilateral meetings between students and researchers at the university and between scientists, researchers and specialized experts from the conference guests; the day also included a special session on scientific research and the Riesman Award for Best Research by Young Researchers Worldwide. The conference included 10 scientific sessions during which 65 scientific researches were discussed in the fields of neurology, orthopedics, rheumatology, immunology, genetics and stem cells. With the participation of Jordanian, Arab and foreign researchers representing Argentina, China, Egypt, India, Jordan, Poland, Romania, Russia, South Korea, Spain, and USA. The conference sessions dealt with research and scientific papers on the latest findings of science and technology in the repair of damaged tissues and organs using cellular therapies, the use of robotics and nanotechnology in the repair and regeneration of damaged tissues, treatment of paralysis, spinal cord injuries and brain and nerve diseases. The sessions also discussed the latest technologies in the early diagnosis for the treatment of brain cancer and autoimmune diseases of the nervous system, utilization of biotechnology and gene modification techniques in the treatment of neurological and structural diseases, the latest scientific developments in rehabilitation and physiotherapy, and treatment of injuries and diseases of the msculu-skeletal system. Aspecial session was held to discuss the latest scisntific findings on the use of stem cells and regenerative medicine in the treatment of liver, genetic, immune and muscular diseases, where researchers from United States, China, Argentina, Egypt, and Jordan presented their latest scientific discoveries in these fields. The conference, which was approved by the Jordan Medical Council for 17 hours, consisted of two workshops on “Methods of Scientific Research and How to Publish Research in Specialized Journals” for young researchers in Jordan, and another workshop on “Ethical and Legal Aspects of Cell Use in Therapy and Research” Addressed to researchers, interested students in related disciplines. The conference included a plenary session on spinal cord injuries involving Jordanian patients with spinal cord injuries and others. International experts from different countries presented the latest scientific developments in this field in cooperation with the Jordanian Spinal Cord Care Society. Participants in the conference represented the Royal Medical Services, Ministry of Health, Jordanian universities, doctors and researchers, research centers, studies and treatment centers from the private sector, neurologists, orthopedists and rheumatologists, as well as stduents in th fields of biotechnology, medicine, and biomedical engineering. As part of the conference, Stem Cells Arabia participated in the medical exhibition held on the sidelines of the conference along with a number of local and foreign companies, health destinations, research centers, studies and treatment centers.